skip to main | skip to sidebar

I have these doubting thoughts sometime about my marriage. It's so hard to admit.  Isn't the first year of marriage supposed to be blissful? Aren't we supposed to be so caught up in our own little world that we float through our lives on a cloud of cotton candy? (Mmmmmm.  Cotton candy.)

Sometimes, all I can think is "What did I get myself into?"

I guess I never realized that marriage is hard.  Not hard like "Errrghh, my Saturday morning strength and conditioning class was so hard (and it's led by a woman who is seriously 95 years old- What gives?)" but hard like "Holy sh*t, I-can't-believe-this-is-the-rest-of-my-life-what-have-I-done?" kind of hard.  At least, for me.  And I'm willing to bet for a decent amount of you guys out there.  If you're not in that camp, color me green with envy and mad props to you for whatever you're doing to manage your relationship.

But I think the real question here is why? Why is marriage so hard? I'd been with my partner for four and a half years when we got engaged and five and a half years by the time we got married.  We'd lived together for three of those years and done the long-distance thing (New York to Miami) for two. I don't think anyone could accuse us of rushing into things or not knowing each well. So what changed when we signed that silly little legal document that committed ourselves to each other for the rest of our lives?

Honestly, I have no freakin' idea.  Isn't that weird? You think I'd be able to pin-point some differences but for the hours and hours (and hours) of thought I've put into this subject, the only thing I can take away from it is the finality of it all. This is it, people.  No take-backs, no changing your mind, no finding something better down the road. For the rest of your life.

The first three months after we got married, everything was all kittens and roses and rainbows.  We got a puppy.  We moved to a one-bedroom apartment in a nicer neighborhood.  And I laughed at all those rumors I'd heard about the first year of marriage being the hardest.

And then, something shifted.  I don't know what it was and I can't even say exactly when it started but all of a sudden, I had a heaviness in my chest like I couldn't breathe whenever I thought about our future together.  And I SWEAR TO GOD, if my husband forgets to the take the garbage out ONE MORE TIME, World War III will (and has) ensue. No exactly a model marriage, right?

The fighting started after about four months.  And I kept waiting for it to stop but every issue we had just compounded and molehills became mountains. Please don't be alarmed, I'm not about to make any big announcement or anything; when I took my vow of forever, I meant it.

I think what it boils down to is that before we got married, the option of walking away was always there, lurking in the background.  And so we worked hard to make sure that neither of us wanted to utilize that option.  But now that leaving is not an option, suddenly it doesn't seem to matter if we work hard at our relationship or not.

It almost feels like, what's the point since we're stuck with each other for good now?  Sometimes, I know that I should be more patient or more giving or more forgiving and yet, sometimes, I just don't care because I know my partner's not going anywhere.  So does that make me lazy? Or selfish? Or maybe both? Yikes.

I think (fingers crossed,) finally, the worst is behind us. I recently realized that a lot of the issues we're struggling with aren't "our" issues but my issues. So I'm trying to acknowledge and deal with them but it's not always easy.  I'm making progress. Good days and bad days, you know the drill.

The thing is though, throughout this tough four-month stretch, I never really felt the deep despair or panic that I felt when we fought before we got married.  I think this proves that the "finality" thing I talked about above is a two-way street; deep-down, I knew we'd make it through everything and emerge as a stronger couple. Maybe that's why we all get married in the first place? I don't know, I'm clearly not the expert.

This was a really (really, really) hard post for me to write- Who wants to admit their marriage is anything but fine and dandy?  But I wanted to share my experience in case some of you out there are in the same boat and wondering if you just made the world's biggest mistake.  My short answer is, no, probably not, you're just adjusting.  Some of us take major life changes in stride, some of us fight and resist and then claw our way out of the misery we've somehow created.

Anyways, if you're recently married, have you experienced any rough patches your first year? Or has it been a smooth, easy transition? Don't feel badly if you're in the latter camp, I'd totally appreciate hearing from people whose experiences have been the opposite of mine...And if you're in the same boat, well, we can all commiserate together, can't we?
Posted by Runrgurl10 at 7:42 PM 14 comments:

All My Love, All My Life: Celebrations!

Once our guests had noshed and drank, chatted and took shelter from the rain, we gave the go-ahead to our DOC to start the party!
We opted not to introduce our bridal party but our (hands-down-best-wedding-decision-ever) band introduced us to much cheering and clapping, as evidenced by our insanely happy and mildly embarrassed faces. 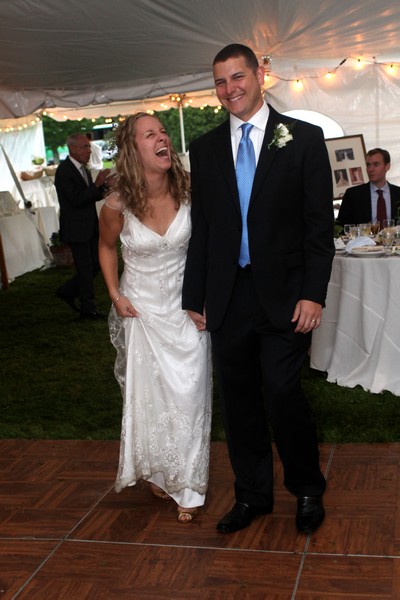 Closed Circle Photography
Notice how I'm holding my dress up in the photo above? That's because my seamstress never put the hook-and-eye bustle in like she said she would.  I didn't discover this until it was too late but thank goodness I included safety pins in my bathroom baskets!
We chose Sonny and Cher's "I Got You, Babe" as our first dance and it was perfect.  We immediately started singing along because it's one of the best songs ever to belt out, especially when you call each other "babe" on a constant basis.  It felt like the song was written for us. 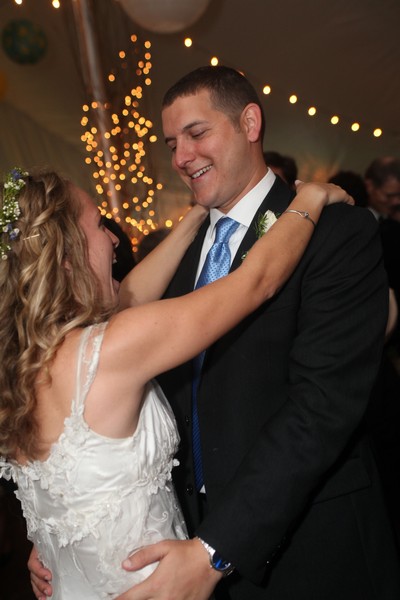 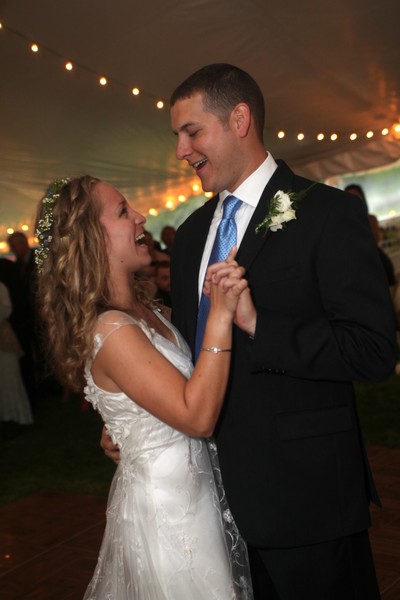 Closed Circle Photography
We had arranged with The Characters beforehand to invite everyone to join us on the dance floor for the second half of the song and it was one of my favorite moments of the night.  Everyone was singing and smiling and we were literally surrounded by love. 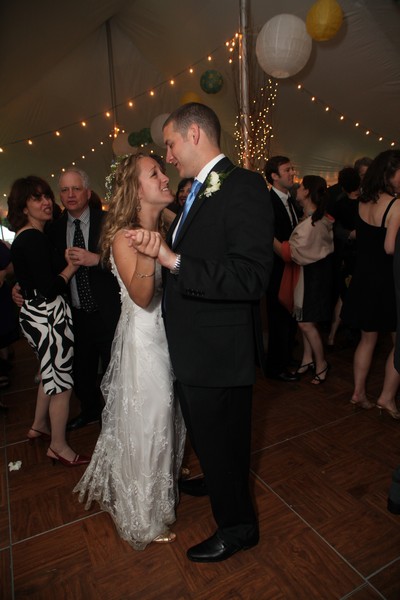 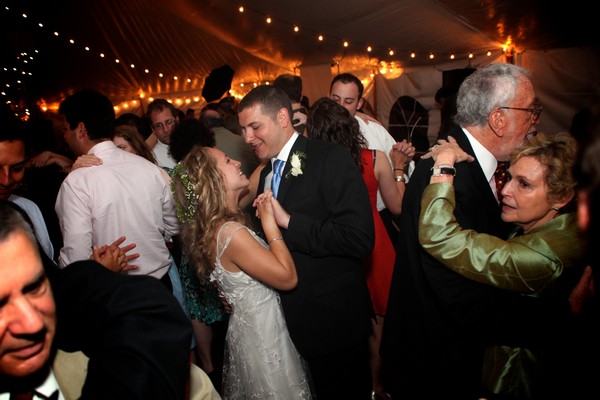 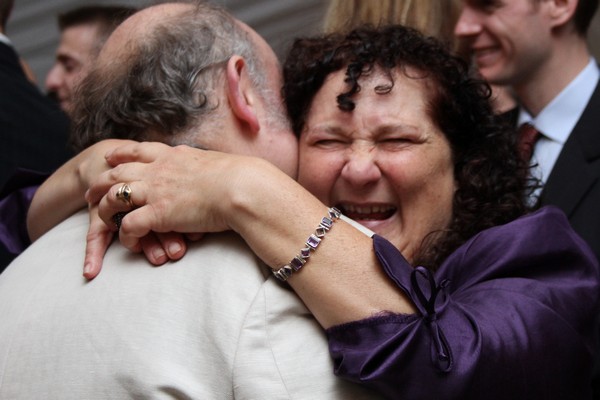 Closed Circle Photography
Since neither of us are particularly notable dancers and we're both pretty shy about dancing in public (unless we've consumed copious amounts of alcohol.  But it was too early in the reception to be that drunk, ha), taking about a minute to do the middle-school-shuffle and then having all our guests join us was the perfect compromise.
After the song ended, I danced with my dad while Mr Trail Mix danced with his mom.  After about a minute, my mom and FIL joined us and we ended up in a (spontaneous) group hug.  Another amazing moment.
We danced to John Lennon's "Beautiful Boy" (although the band replaced "boy" with "child," to make it gender specific.) 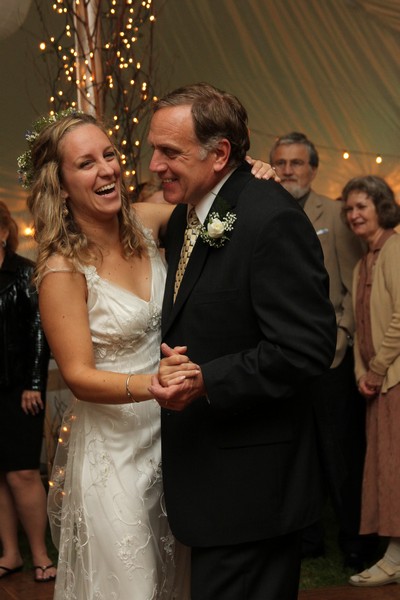 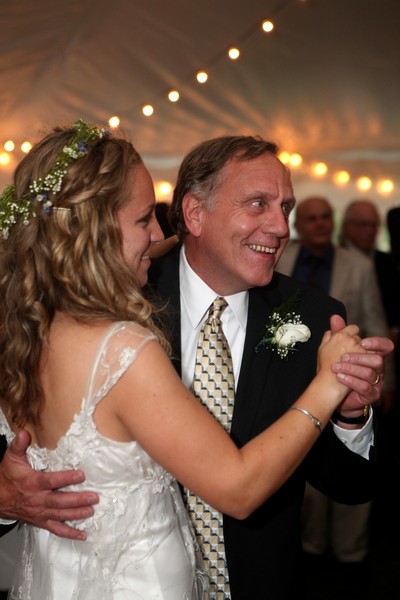 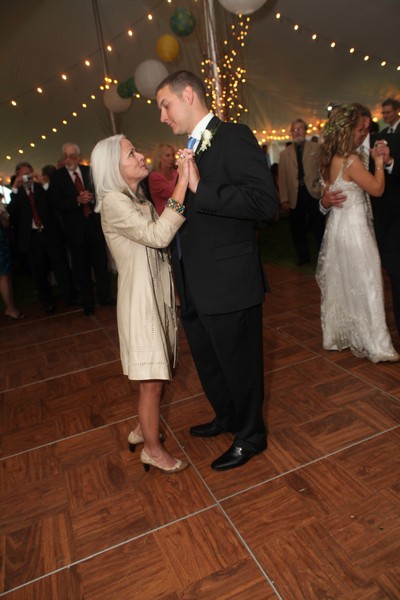 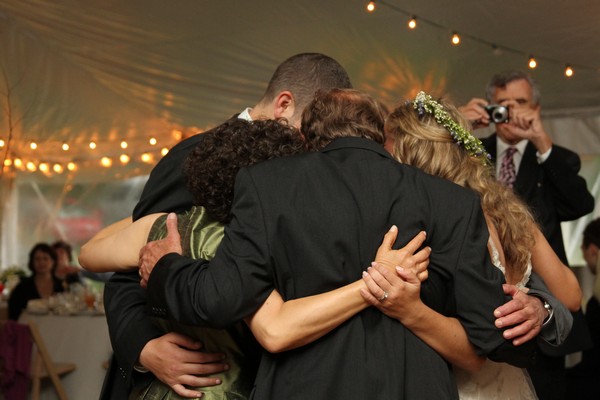 Closed Circle Photography
And finally, we danced the Hora! I love this dance at weddings and in spite of our troubles finding an acceptable version of Hava Nagila (we ended up downloading EIGHT different versions, none of which were perfect.  Thanks, iTunes) the Hora was a total blast. 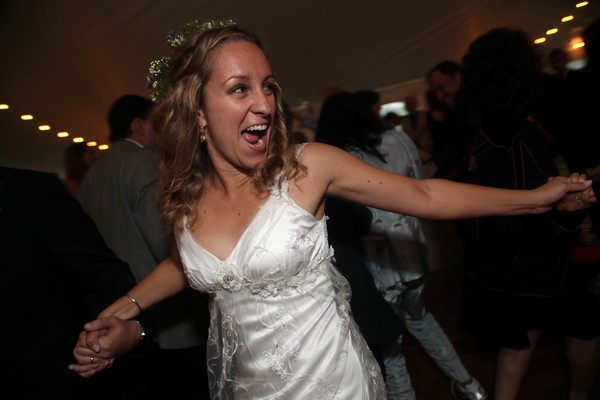 Closed Circle Photography
Mr Trail Mix seemed to have zero fear being hoisted in the air on a rickety wooden chair by his (mostly) not-sober fraternity brothers. 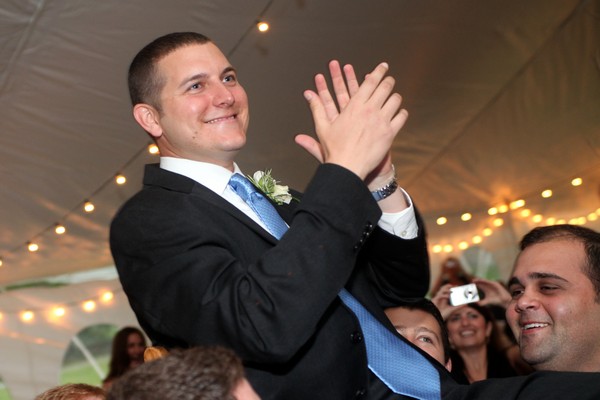 Closed Circle Photography
I, on the other hand, experienced a large amount of fear, as evidenced by my face in the photo below. 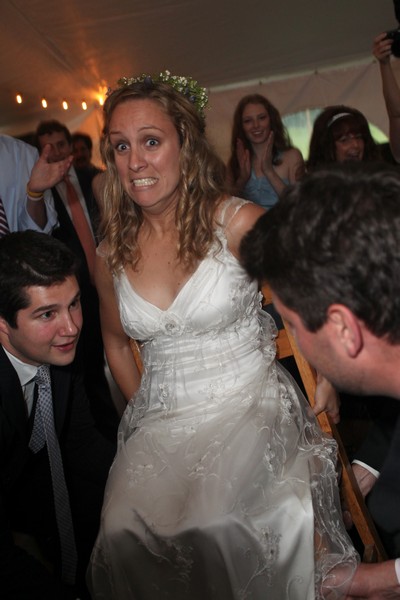 Closed Circle Photography
It's funny because I remember at the time thinking how high up I was and that if I fell, I might actually die.  But then I looked at photos and saw that I was really only about 5-6' in the air. Huh. 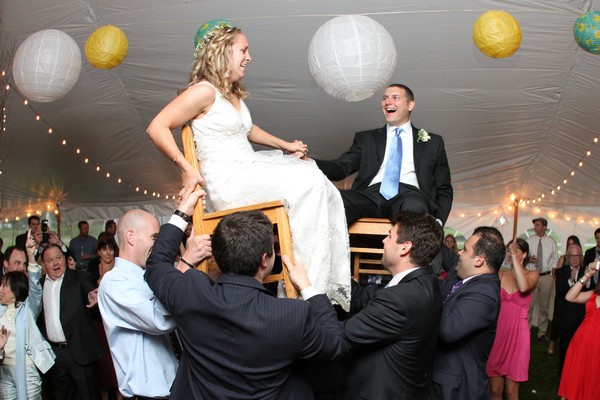 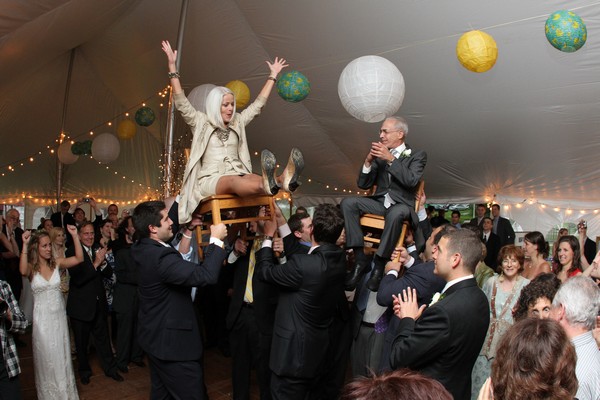 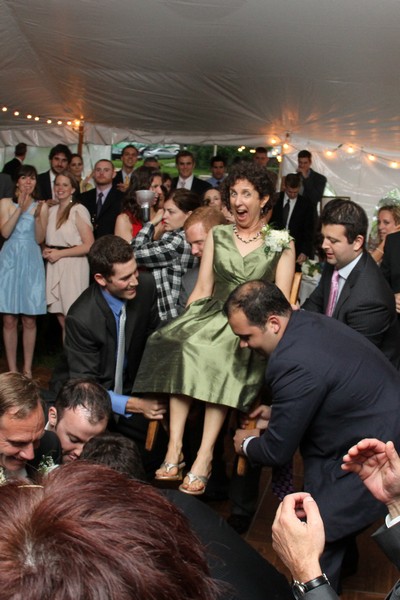 Closed Circle Photography
Brother Trail Mix got in on the fun too! 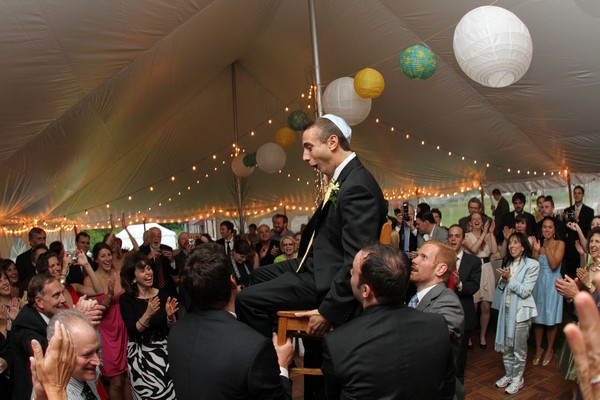 Closed Circle Photography
I don't think our band had performed at a Jewish wedding before ours because witnessing our maniacal, crazy Hora dance left them momentarily silent after the song ended, before the main singer yelled out "OK, you guys are crazy!"
I swear, I have it on video tape and it is awesome.
And then, The Characters launched into a rockin', riotous version of Creedence Clearwater Revival's "Have You Ever Seen The Rain?" and the crowd went nuts.  We danced, shouting the lyrics and pumping our firsts, and finally embraced the weather as part of the experience. 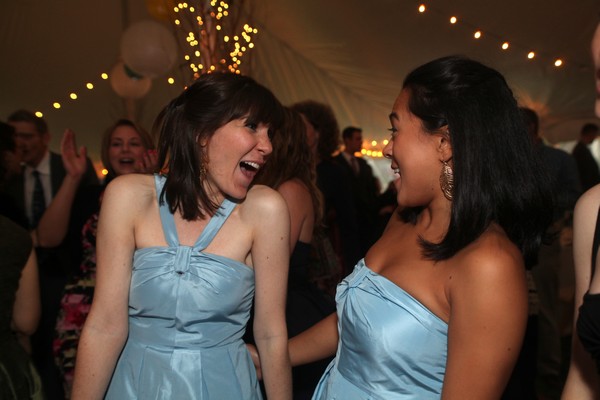 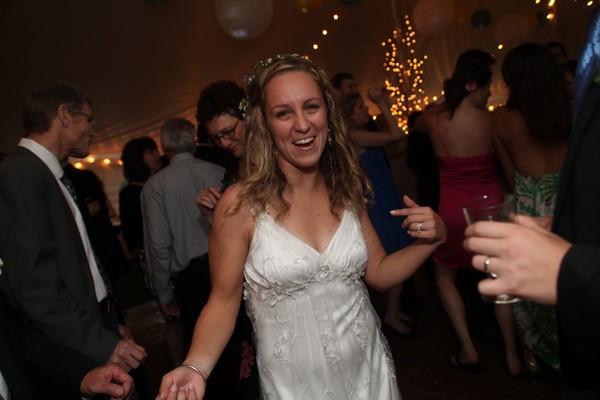 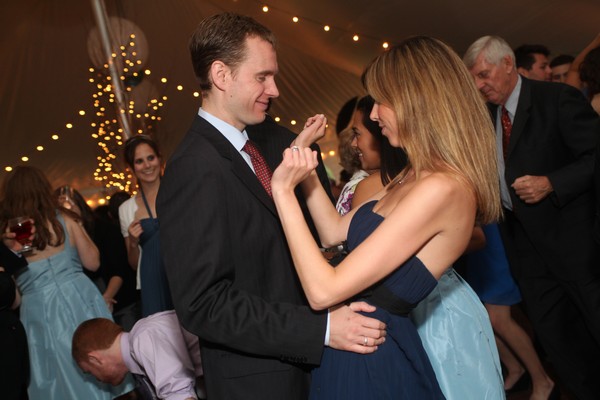 Closed Circle Photography
The band hit a few more classics after this song ended, including a Beatles' medley (best. thing. ever.), Build Me Up, Buttercup and Shout. It was glorious.


The band finished up their first set in about an hour and it was finally time to eat!

All My Love, All My Life: Cocktail Hour and Reception Details

she said she usually cried
at least once a day
not because she was sad
but because the world was so beautiful
and life was so short
-brian andreas
Check out www.weddingbee.com and look for Miss Trail Mix. That's me :)

Runrgurl10
NYC
I'm a country girl who somehow found herself living in the big apple and loving every minute of it. I'm planning a rustic, country-chic wedding in my hometown for 175 guests and it's going to be a Party with a capital P. Speaking of P, he's my future hubby and there's no one else I adore more. White wine, flea markets and running keep me happy and my family, friends and fiance are my world. I'm a little bit crafty, a little bit crazy but mostly just crazy in love.